Observations and actions are key concepts of Cogment, they are main input / output of the different components:

This discrete framework makes it easy to model the sequential decision making of the Actors in Environments, it is borrowed from Markov Decision Process (MDP) formalism, in particular Partially Observable MDP (POMDP): each Actor can get a different Observation from the environment representing what it perceives about the state of the world. The Action represents the decision the Actor takes upon receiving this observation, this action is then applied by the Environment. Cogment leverages this discrete update to orchestrate the execution of the components and the dispatch of data between them.

Trials are what a Cogment deployment runs. They enable Actors to interact with their Environment. Trials are started by clients connecting to Cogment. A trial can end either by being terminated from a client or end by itself, for example once a specific state of the Environment is reached.

A trial is defined by the participating Actors and the host Environment. As a concept, Trials are quite close to Reinforcement Learning's Episodes, i.e. all the states that come between an initial state and a terminal state. However, because Cogment can be used outside of an RL context, we prefer using the more generic term of Trial.

Actors within a trial instantiate actor classes defined by the nature of the information they receive from the Environment, their observation space, and what actions they can perform, their action space.

In Cogment, the observation and action space are defined as typed data structures. In particular, Cogment uses Protocol Buffers - protobuf - as a format to specify these data structures. This typing defines both an interface contract between the Actors and the Environment and helps convey semantic information, thus facilitating the independent design and development of both.

An Actor might be controlled either by a software agent, or by a Human. Whichever the case, the process of generating actions based on observations remains the same, and the Environment treats them the same.

The Environment is the context within which the Trial takes place. The Environment receives the actions done by the Actors, usually updates an internal state, and generates an observation for each Actor.

The Environment is the main integration point between Cogment and an external system, either a simulation or a real world system.

At the heart of every Cogment project is a YAML spec file typically called cogment.yaml. It specifies the trials for this project including its actor classes and their action & observation spaces. You can learn more about the specification file in the dedicated reference page

Running trials with Cogment usually involves the deployment of a cluster of services and clients. These components are either provided by the Cogment framework, depicted below in blue, or implemented for a particular project, depicted below in orange. 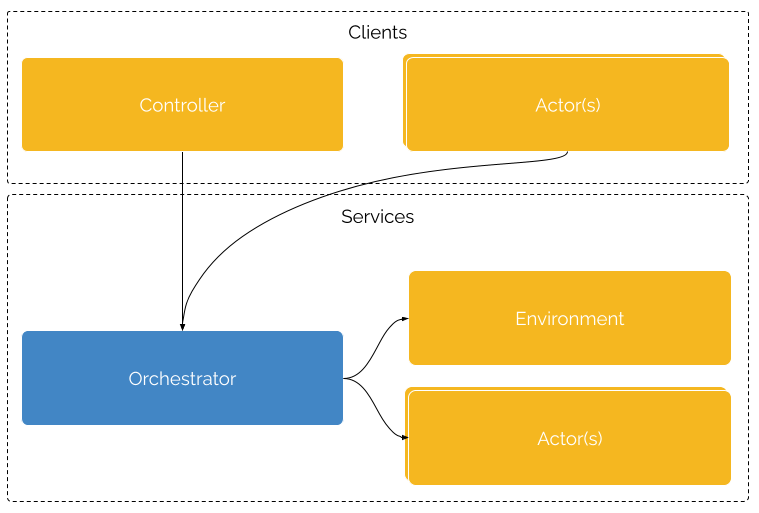 User implemented components use one of the Cogment SDKs or directly implement the underlying protocol. Components communicate using gRPC, clients can also communicate in a web-friendly way using gRPC-Web and grpcwebproxy.

The Orchestrator is the glue that binds everything together. It is responsible for running the Trials and contacting other services as needed to ensure their execution.

The key aspect of Cogment's orchestrator is its capacity to handle a number of network connections in parallel while keeping its responsiveness.

The Controller is a key part of using Cogment, it initiates communication with the Orchestrator to control the execution of Trials. It is responsible for starting Trials, retrieving and watching their state (including the end of the trial), or requesting trial termination.

Using one of Cogment's SDKs, the Environment can be implemented as a function integrating a "state of the world" with the Trial. This function performs the following tasks during the Trial:

Using one of Cogment's SDKs Actors can be implemented as functions handling the integration between a decision-making Actor (software agent or Human) and the Trial. This function performs the following tasks during the Trial:

Please note that rewards can also be retrieved after the fact using a datalog.

On top of the core components described above, a Cogment deployment can include these additional ones:

The following table summarizes how each component can either be implemented or used out of the box.